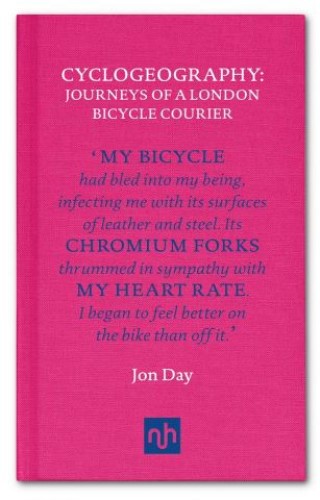 Cyclogeography is about the bicycle in the cultural imagination and also a portrait of London as seen from the saddle. In the great tradition of the psychogeographers, Jon Day attempts to depart from the map and reclaim the streets of the city. Informed by several grinding years spent as a bicycle courier, he lifts the lid on the solitary life of the courier. Traveling the unmapped byways, shortcuts, and urban edgelands, couriers are the declining, invisible workforce of the city. The parcels they deliver keep things running. For those who survive the crushing toughness of the job, the bicycle can become what holds them together.

Jon Day: Jon Day is a writer, academic, and cyclist. He worked as a bicycle courier in London for several years and is now a lecturer in English literature at King’s College London. He writes for the London Review of Books, n+1, the New Statesman, and others publications, and is a regular book critic for the Financial Times and The Telegraph. He is a 2016 Man Booker Prize for Fiction judge.